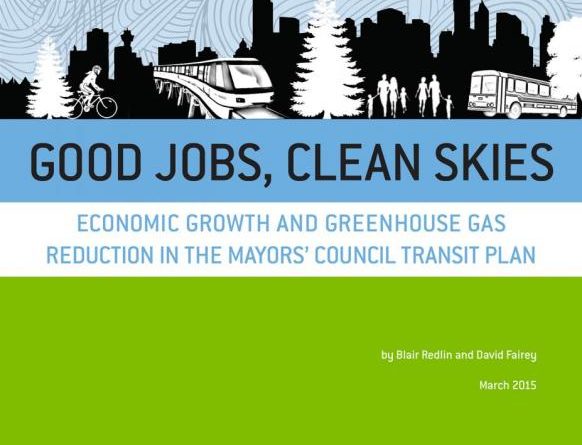 Good Jobs, Clean Skies, a co-publication of Green Jobs BC and Blue Green Canada, finds that the Metro Vancouver Mayors’ Council Transit and Transportation Plan will generate thousands of jobs, significantly cut traffic congestion, and reduce the environmental impact of transportation in the region.

The report finds that the transit plan will result in 43,800 person years in total new employment, $2.96 billion in wages and $4.48 billion in GDP, while reducing projected greenhouse gas emissions by 8.2%.  The report also finds that carrying on with the status quo would cost the region an additional $1 billion per year by 2045, doubling the current costs of congestion, while implementing the Mayors’ plan would reduce the costs of congestion by as much as 41.3%.

Over 6,000 people in Metro Vancouver work in mass transit. The report projects the plan will add an additional 5,901 person years of employment annually by 2024. The plan would make it easier for people to access jobs, putting 60,000 more jobs within reach of people in the region.